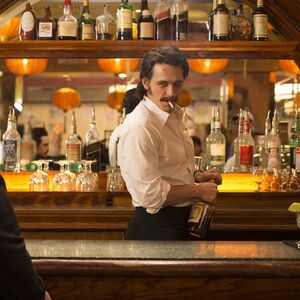 Vincent Martino is a main character on HBO's The Deuce. He is portrayed by James Franco. Vincent is the twin brother of Frankie Martino. They also have a sister named Fran Dwyer. They were born and raised in Brooklyn, New York. Vincent works as a bar tender and bar manager, splitting his time between tending a bar in Brooklyn and managing the bar of a Korean restaurant in Manhattan.

Vincent is married to Andrea. They have two children. The family home in in Brooklyn. Between the two jobs Vincent struggles to be home with his family. Andrea is unhappy with Vincent working two jobs and not being faithful to her. Vincent is similarly unhappy about Andrea seeing other men.

Vincent makes a point of booking a night off to take Andrea out. His boss at the Brooklyn bar protests to him going when the bar is busy and makes it clear that he will lose his job if he does not stay on. Vincent walks out anyway and is frustrated when he arrives home to find Andrea out again. He heads out to find her, tracking her down to a pool hall. He finds her inside playing a rack with Eddie and Rico. He is shocked to see that she has taken off her skirt, which she claims was to allow freedom of movement. Vincent fails to get her to leave with him and is intimidated and mocked by Eddie. He decides to move out and into the Lionel Hotel in Manhattan.

Andrea meets Vincent and acknowledges that they have many problems but seems open to reconciliation and is disappointed when Vincent declines to move home.

He begins a flirtation with college student Abigail Parker.

Vincent sleeps with Ellen, one of the cocktail waitresses from the Korean Bar.