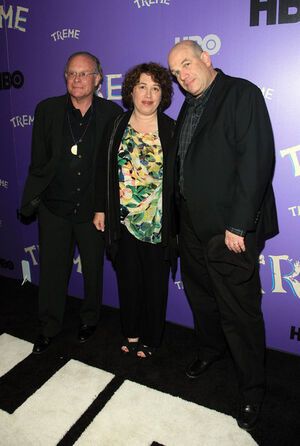 Nina Kostroff Noble is a television producer. She is an Executive Producer for HBO's The Deuce. She has worked extensively with The Deuce creators David Simon and George Pelecanos on other projects including The Corner, The Wire, Generation Kill, Show Me a Hero and Treme.

Noble is the daughter of mother Pat Curtice who worked as an Assistant Director on commercials and father Larry Kostroff who worked in the film industry in various positions including as producer. Noble's brother, Michael Kostroff, is an actor. Noble says she spent her childhood on movie sets, growing up on location. She has a degree in sociology.

Before entering television she worked extensively in film. Initially she was a production assistant and then became a second assistant director after joining the Directors Guild of America in 1984. She worked as a freelance assistant director for ten years and worked with several notable film-makers including Alan Parker, Paul Mazursky, Ron Shelton, Stephen Frears, Paul Verhoeven and Ivan Reitman.

In 1993 Noble worked as an assistant director for the first season of Homicide: Life on the Street. The series was based on the book Homicide: A Year on the Killing Streets by The Deuce co-creator David Simon although the two did not work together directly on the project.

In 1995, Noble began producing and production managing television projects for Barry Levinson and Tom Fontana. They introduced her to Simon in 1999 when he was developing his book The Corner: A Year in the Life of an Inner-City Neighborhood for the HBO network. She collaborated with Simon and Robert F. Colesberry to produce the Emmy award-winning The Corner for HBO.

Noble continued her collaboration with Simon and Colesberry on their next project The Wire. She was involved from the beginning and was credited as a producer for the show's first season. She retained her role for the show's second season and her credit was upgraded to co-executive producer. For the third and fourth season she was credited as executive producer alongside Simon. She continued in this role for the fifth and final season.

Noble has served as an Executive Producer for all of Simon’s subsequent HBO series including Generation Kill, Show Me a Hero and Treme. On their collaboration: "My credibility is predicated on working with Nina," Simon says. "Nina makes us come in on budget all the time. Ask HBO how many shows they have that come in on budget."

She is married to David Noble. She has two sons, Nick and Jason