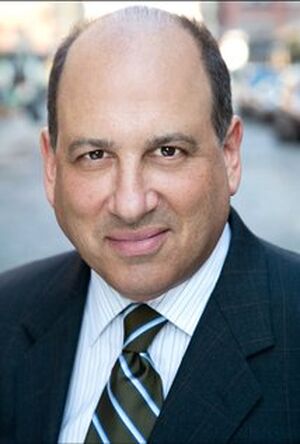 Michael Kostroff, born May 22, 1961 in New York City, New York, USA, is an actor. He has a recurring role as Rizzi in HBO's The Deuce. He is the brother of series Executive Prodcuer Nina Kostroff Noble.

He worked with The Deuce creators David Simon and George Pelecanos on the earlier HBO series The Wire, where he has a recurring role as duplicitous lawyer Maurice 'Maury' Levy. He appeared in all five seasons of the show from 2002 to 2008. His sister Nina was also an Executive Producer for The Wire. He shared several scenes with The Deuce starring cast members Lawrence Gilliard Jr. and Gbenga Akinnagbe while working on The Wire. He reunited with Simon and Kostroff Noble for the HBO miniseries Show Me a Hero in 2015, playing Ralph Arred.

He has a recurring role in Marvel TV series Luke Cage (2017) as Dr. Noah Burstein.