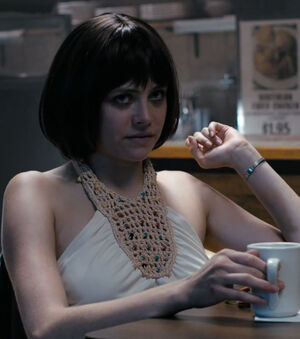 Melissa is a recurring character HBO's The Deuce. She is portrayed by Olivia Luccardi. Melissa is a prostitute working on 42nd Street. Reggie Love is her pimp.

Melissa is introduced as one of Reggie Love's girls. She oftens works with Barbara.

In I See Money, Melissa and Barbara create a scheme to steal from their johns in order to make up the cash they are missing while sleeping with each other rather than working.

When the parlour opens, Melissa is one of Reggie's girls that is sent to work there.

While trying to steal from a john in Au Reservoir, Melissa and Barbara are caught and are subsequently thrown out of the parlour. The next day, Melissa arrives at Leon's diner wearing sunglasses to cover the two black eyes she received as punishment from Reggie.

Later in the episode, Leon shoots Reggie when he tries to force Melissa to go out on the street to work. Melissa flees the scene in horror as Leon calls the police to report the crime.