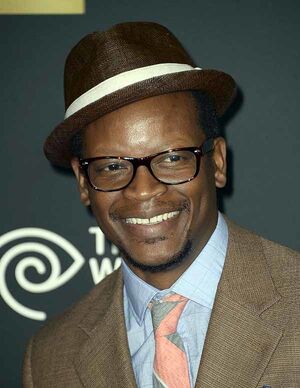 Lawrence Gilliard Jr., born September 22, 1971 in New York City, New York, USA, is an actor. He has a starring role as Chris Alston in HBO's The Deuce.

Gilliard had an early guest starring role in the series Homicide: Life on the Street, which was based on The Deuce creator David Simon's novel Homicide: A Year on the Killing Streets. He played William Lyness in the first season episode "A Dog and Pony Show" (1993).

He appeared in the Martin Scorcese film Gangs of New York (2002) as Jimmy Spoils.

He starred in the crime drama The Beast as Raymond Beaumont in 2009.

He had a starring role in The Walking Dead as troubled army medic Bob Stookey. He joined the cast in season 4 in 2013. He returned for season 5 in 2014. He reprised the role as a guest star in a single episode for the fifth season in 2015. He shared several scenes with fellow The Deuce starring cast member Chris Coy in the fourth season.

He worked with The Deuce creators David Simon and George Pelecanos on the earlier HBO series The Wire, where he has a starring role as conscientious drug organisation lieutenant D'Angelo Barksdale. He starred in the first season in 2002 and returned for the second season in 2003.

He had a starring role in Graceland (2015) as Agent Sean Logan.