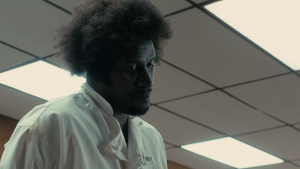 Leon is a recurring character on HBO's The Deuce. He is portrayed by Anwan Glover. Leon runs a grill and restaurant in Manhattan. His clientele includes the pimps and prostitutes that work along 42nd street. Regulars include C.C., Reggie Love and Larry Brown.

Leon is shown to be friendly with the prostitutes of 42nd Street, and appears angered by their mistreatment at the hands of the pimps. He frequently scolds the pimps for being vulgar in his diner.

In Au Reservoir, after Reggie beats up Melissa, Leon shoots Reggie in a later confrontation. Afterwards, he calmly calls the police and reports his own crime.