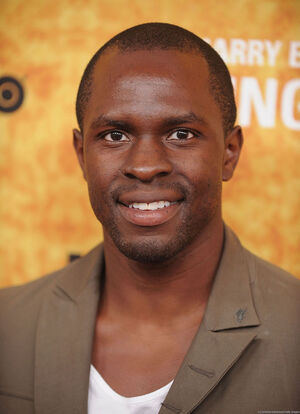 Gbenga Akinnagbe, born December 12, 1978 in Washington, District of Columbia, USA, is an actor. He has a starring role as Larry Brown in HBO's The Deuce.

He previously worked with The Deuce creators David Simon and George Pelecanos on their earlier series The Wire. He had a starring role as drug organisation enforcer Chris Partlow in The Wire. He joined the cast for the third season in 2004. He returned for the fourth season in 2006 and again for the fifth and final season in 2008. He shared several scenes with fellow The Deuce starring cast members Method Man and Anwan Glover on the show.

He had a recurring role in the FX drama series Damages in 2010. He played private investigator Walid Cooper, who worked with Ellen Parsons, played by principle cast member Rose Byrne.