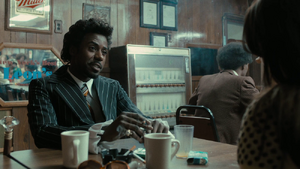 C.C. is a main character on HBO's The Deuce. He is portrayed by Gary Carr. C.C. is a pimp in New York. His stable of prostitutes consists of solely Ashley in 1971. He adds Lori when she arrives in New York from Minnesota.

C.C. is violent and uses a straight razor to harm Ashley when she tries to convince him to let her not work during a rainstorm.

C.C. maintains a friendly relationship with his fellow pimps Larry Brown, Rodney and Reggie Love. Along with his colleagues he is a regular at the Korean Bar managed by Vincent Martino and Leon's grill.

Eventually Lori´s alleged ownership by C.C is bought by Rudy Pipilo and Matty "The Horse" Ianello for 15,000 USD (non negotiable), that were tipped by Lori´s new manager, that they needed to get rid of C.C´s cleanly. C.C accepts, knowing that he had no chances against the Italian mafia.

However C.C know that he can get more money out of Lori´s royalties in "Red Hot" and in a bolt move goes directly to Frankie Martino (who is a producer) and finds him in the French Parlor managed by Bobby Dwyer, Frankies brother in law. Frankie gets a straight no, about the royalties, given that "Red Hot " has not been released. However, C.C, who gets offended by not being paid, start picking a fight with Bobby Dwyer who eventually stabs C.C in the chest with a screwdriver, C.C grabs Bobby and starts strangling him. Frankie, trying to save Bobby, grabs a hammer and hits C.C repeatedly in the head, killing him.