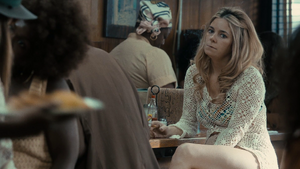 Ashley is a recurring character on HBO's The Deuce. She is portrayed by Jamie Neumann. Ashley is a prostitute working on 42nd Street. C.C. is her pimp.

Ashley is introduced in Pilot as C.C's girl. With Lori's arrival, Ashley loses C.C's favor, as she increasingly does not wish to work.

C.C. cuts Ashley under her arm with a straight razor when she asks for a night off because she has been soaked in a rainstorm.

Later, Ashley is sent to work at the Parlour with many of the other girls from 42nd Street.

In Au Reservoir, Ashley is dropped off for her morning shift by C.C and decides to run away. She has a brief fling with Frankie, who later gets Abby to help hide Ashley at her apartment.

Ultimately, Ashley decides to leave New York City and go live with her sister in Lackawanna. Having bonded with Ashley, who reveals her birthname to be Dorothy Spina, Abby gives Ashley a cheque from Mr. Parker.